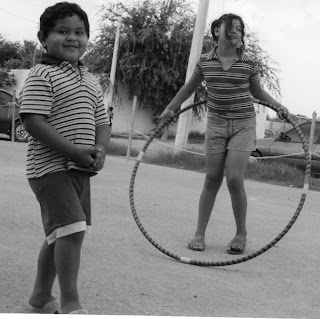 In 2003, I took my first International trip since I began hooping. This was also my first service trip where I traveled with my mother to volunteer service towards a clinic and house building project. Not knowing exactly how I would live without the hoop for a week, I decided to put one broken down hoop in my bag to assemble upon my arrival. I also believed that there would be an opportunity to hoop at the medical center or a local school while there. This had been a long time dream of mine.


In the developing world, the medical centers are often kept going through the volunteer services of visiting doctors, nurse practitioners and nurses. They are often also supported by the funds of church congregations and non-profit organizations. My mother has a particular sensitivity for the poor, in our own country and abroad, and is passionate about serving them whenever possible. When these visiting professionals arrive, word travels through the communities and folks travel sometimes long distances to be seen. Then, they wait. The volunteers see hundreds of patients who often travel with kids in tow.

I offered my service by joining a home construction team in this border city which appeared to be very stratified in wealth. This city was very modern with hotels, strip malls, mega grocery stores and shanty towns that stretched for an alarming distance. We built a 3 room house of cinder blocks near the medical center for a family who was living in a car.

The family was Christian as was the service organization I was volunteering for. While I don’t consider myself a Christian, I respect the value of public service that is an important aspect of the Christian church. As my first “mission” trip, I was very conflicted. I have no interest of converting others and am resentful of the ways the Christian church has handled conversion and oppression over the past two thousand years. At this point, many of the “mission” trips aren’t so much about conversion, but assisting communities who have been long converted to Christianity. In the same way that we build tribes around yoga, hooping, music, Christians take care of others who are in need within their tribe. Hoopers are beginning to build that sense of tribe, assist one another and reach out in times of need because another person hoops as a regular daily practice. We can identify with their rituals and most likely, a lightness of being that comes in the hoop.

I got one afternoon “off” during my week of service. We took breaks for lunch and siesta during the hottest part of the day and then when back for the late afternoon/evening building shift. Siesta, for me, consisted of a brief rinse to relieve yourself from the noon heat and morning sweat from lifting cinderblocks. Then, we took naps to recover and rejuvenate for the next phase of manual labor.

On my free afternoon, I went to the medical center in my modest, homemade outfit of shimmery indigo thai-style wrap pants and a white peasant shirt. I walked into the medical center feeling a bit out of place and somewhat nervous, but also had a rush of energy knowing that this was a long time vision I had had – to hoop in a healing environment in an attempt to relieve the mind’s preoccupation with illness, pain, worry. More on those long term outreach visions to come.

I put an instrumental CD into a small boombox that lacked in bass and volume, but still gave me something to find a home within. With blue medical slippers over my tennis shoes, I began to spin. It wasn’t my richest or deepest flow, but the ice was broken and I received a few claps, smiles and other looks of disbelief. These were not necessarily the wonder –ful expressions like wow, what did that girl just do with a ‘hula hula?’, but more like “what’s going on, why is there a girl hula hooping in the doctor’s office?” I continued. The smiles increased.

There were individuals across the life span in this waiting room. Men, women, grandmothers, mothers, children, babies. I met a teenager with a couple of children, her youthful mother and her grandmother. Four generations of women right there in the clinic. I wasn’t sure “why” my heart had called me to offer such a gesture to this space in Piedras Negras, but it would soon reveal itself.

After a couple of songs, I tried to encourage others to give it a whirl. Of course, in that sterile room, in front of many others, no one was jumping up for the opportunity to hoop. Suddenly, I realized that we needed to go outside to make this work. All the kids followed. Shy at first, no one offered to be the first to spin. But, as it is with kids, it didn’t take long for them to be waiting in line for their turn. While their parents waited for care for a wide range of ailments, the kids hooped and played and revealed an indestructible, incorruptible spirit. Despite the lack of material wealth and opportunities, they were able to laugh, smile, play and create with no reservation.

Over the following days, I returned to the medical center at the end of my construction shifts to meet the group of kids. They gave me a tour of their neighborhood, took me into their homes, showed me their games. We crafted and played in every opportunity.

I think they were surprised to see a woman, in her late twenties at the time, without children or husband. Traveling, dancing playing. With the little Spanish I spoke, I engaged and encouraged them. Touched by their warmth and sweetness, I wondered how they could remain so strong and happy in what most would consider such unfortunate circumstances. It was during this trip that I realized the lessons of simplicity, gratitude and joy were for the American travelers. Those lessons were more important than any we could offer them.

It was hard to leave these kids on my last day. The hoop stayed behind for the medical center and school.