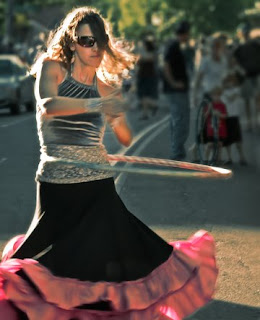 
Spinning has been a huge part of my hooping practice over the years. The stall, being one of the moves Bax & I discovered with our five foot hoops back in 2001, was my introduction to spinning with the hoop. Then, 2 years later, seeing Anah (a.k.a. Hoopalicious) hold the hoop still with both hands bringing it up and down the height of her body as she briefly spun in a circle opened up another world of stalling for me (thanks hoop madre.) Ah, the beauty of combining movement with stillness to produce a mesmerizing effect! At that point, I had practiced stalling by resting the hoop along my core or holding it in my hands off the body, but not holding the hoop with the hands around the core. This revolutionary technique has many influences and various aspects. Here are a few reasons I think I started and continue spinning…

AESTHETIC: This style of spinning for prolonged periods of time creates a graceful and divinely feminine effect when wearing a skirt. The simple childhood pleasure of spinning in a circle to watch one’s dress come alive, be dazzled by its rippling flow and to even get delightfully dizzy upon stopping, was early on a motivating factor to maintain that circular movement with the body.

PRACTICAL: Outside of my home, I have clocked the most flight time with my hoop on the Weaver St Market lawn. As us Carrboro hoopers know, this ground is ripe with wandering children and absent minded or just stubborn pedestrians who assume we will move before they approach (even if our backs are to them and we have given no sign that we are aware of their presence.) To keep that hoop space safe and available for everyone, it is important to keep the bloody noses and busted lips (of others) down to a minimum. For me, this means maintaining awareness on every side of me as much of the time as possible. Small children can’t help but be lured in by the beams of light cast by the hoops movement and WILL walk right into the magical circle even if at full speed. Early on, I realized I would come closer to having eyes in the back of my head if I continued that already enjoyable spin and even increased my speed. Even with the world is a bit blurred by this turning, humans entering the circulation
will be perceivable.

MYSTICAL: While in college, I studied world religions and was particularly fascinated by the mystical sects. I have a confessed fascination with religious ecstasy and methods of achieving such states of bliss. I remember reading briefly about the Sufis and their poetic whirling worship but didn’t delve deeply into the works of Rumi and the study of the dervishes until my practice began to evolve that way (instinctually and for reasons mentioned above.) Early on in my practice, I found myself transported to a truly peaceful and blissful trance from this style of hooping. Local Sufis remarked upon watching mine & Spiral’s hooping that they connected with our dance on that spiritual level. If a dervish is someone who “sits at the door or gateway between the visible earthly reality and invisible realms of spirit,” the mystical movement becomes a prayer reconnecting the dancer with the divine source. This ecstatic dance shines light on the world, possibly taking viewers vicariously to that spiritual realm as well.

I have gone to the Sufis for instruction from time to time to further develop this skill for my hoop practice. Interestingly, the bliss comes to me now from being grounded and stable within the spin rather than giving way to dizziness. (Practically speaking, as a hoop and fire performer, there is no place for spinning until I fall out with glee in the grass as was acceptable in childhood.) There is no doubt that we, while whirling, are connecting with ancestral practice of communing with the divine and finding ecstasy. It is also a practice among Tibetan Monks, American Shakers and contemporary trance dancers.

CURRENTS or DIRECTIONS: While I have much more to study and practice in this realm, I have made tremendous breakthroughs in the lengths of time I can spin; the ability to rest in a variety of gazes; a freedom to spin with and without a hoop; and extrapolating on Baxter’s emphasis on hooping in both directions, I am developing the ability to spin my body in both currents. However, I would like to clarify something about changing directions in this particular practice. I truly believe some of the joy and breakthroughs I have had with this have come from riding the wave in a consistent direction as long as possible. It is when I have turned on & on, grounding on my left foot and pivoting with my right that I have let go of focusing on one point (my hand or the hoop) or the gentle ripple of the skirt. It is this continued spinning that has liberated my head and neck to explore rolling when inspired and given my sight the ability to rest completely trusting the inner gaze and letting the eyelids fall completely. It is in this way of whirling and revolving that I have found Peace. Developing a tolerance for dizziness through a sustained spin will strengthen our ability to stall the hoop in any way we desire. So, I suggest for all of us who desire to practice this to hoop in one direction as long as possible and then switch directions to try the spinning in the opposing current. Slow down gradually and make sure you are grounded before starting to spin in the other direction. This can also produce an interesting winding and unwinding effect energetically. Once resistant to dizziness in both currents, we may find that stalling briefly and then reversing to stall in the opposite direction may be executed with greater ease. Just as the flow of my left current continues to teach my right on many angles, I am finding my right foot rooting to free my left for continued exploration.