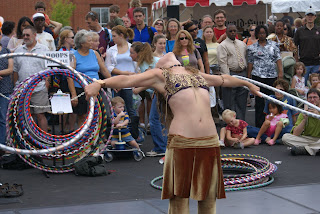 So, I’m really diggin’ practicing with two hoops right now. The increased meditative and physical effort is both challenging and deliciously satisfying. The two spinning in unison takes me back to the day when my hoops were a bit bigger and heavier. They had such a presence on the core, massaging the low back and belly as they slowly circled the body. Separately, the two feel almost like feathers in flight holding the lightest contact with my body.


Recently, I went to hear a friend’s band (Nodsense) play. Unfortunately for them, it was a pretty dead night. But fortunately for both of us (the band and myself) the hoops filled the dance floor. While I’ve spent time practicing with two hoops, twins as we call them here in Carrboro, I had never felt so connected to them before this moment. I felt I bridged a gap between moving and dancing with the pair; linked movements I hadn’t before; was liberated to move the rest of my body to accentuate; and fully in the flow with the pair and this song that I’d never heard, but was still intuitively linked to. When the song ended, I paused for a water break and Scott (my partner who sees me hoop maybe more than anyone) gave me a look and said “Woah, I’ve never seen that before!” And there’s no way he could’ve because I’d never experienced that flow before. It was a birth, a moment full of new connections and hyper rhythmic awareness. Then Scott, a skilled drummer, told me the tune was in ‘7.’

I practice to a lot of music that is in 4/8 time - hip hop, techno, disco, funk. If someone had asked me to create a movement or rhythm in 7, I would’ve been stumped at first (even though I’m playing with drums a lot these days and know fully well how to count to 7. Maybe I have even danced to songs in this timing plenty and just not realized b/c I wasn’t counting.) I think is so beautiful and fascinating to feel totally connected to a rhythm I couldn’t articulate or describe afterward. It was just a raw, direct experience with no mental interference. It was so incredibly helpful for the evolution of my practice. I had been spending a little too much time in conscious practice with the two (because I usually feel a little nervous to bust them out at a show and let go) and not enough ‘groove’ time with them.

Since then, I have had other delightful moments with the pair. Yesterday, I had the two linked in an axis and worked with them as one – holding one while with the other nestled within it forming an x. I was able to hold one and let the other open and close to different degrees as I spun, lifted and rolled the hoop around me. When they came tightly together, but remained crossed, I was able to vertically roll them both across my chest as I would one hoop.